I am a fifth generation Tasmanian, but fled my home state as soon as I graduated from university. I started my academic career in England and have held academic posts in Australia, Canada and Hong Kong. Like the autumn leaf in the Chinese proverb, I too fell to my roots: in Tasmania, where I live with my wife and partner, Catherine Tang. We are both now exercising our right hemispheres, Catherine with several genres of craftwork, me with writing fiction.

A novel that will appeal to teachers: The lifelong story of a secondary school teacher.

‘Not suited! What single person in this world is suited to any other their whole lives through?’ Not a very propitious thought for the recently married Peter Morrison.  And so it turned out.

When Peter was a child, his father pushed the Peter’s beloved teacher to enlist in World War II, thereby unleashing a series of events that resulted in his first boyhood grief. With his first taste of tragedy, Peter began to doubt the certainties instilled by his conservative father and religious mother and a lifelong march to the beat of two different drummers ensued.  One drummer led him to become a schoolteacher and dedicated family man like his father. The other drew him to illicit love, a midlife crisis and scandal in his own classroom. With age and wisdom, Peter eventually righted his choices with love and work before hearing once again, in old age and verging on dementia, the beat of the other drummer.

‘At last, a novel to rival the great Australian classics The Advancement of Spencer Button (1950) by Brian James and Sumner Locke Elliott’s Careful, He Might Hear You (1963)! The author’s philosophic fatalistic sense of humour, of defeat and death as part of life’s comic inevitability is striking. He invests his novel with convincing sociological recreation, rich characterisation, psychological insight and diversity of range – from comedy to pathos.  A hugely satisfying read and a fine family saga enriched ironically by the shadows of World War II.’                                         John Ramsland, Emeritus Professor, University of Newcastle, Author

‘ … an enticing and engaging novel that reveals deep insights into pervasive factors influencing our lives. Peter, a school teacher, makes choices that severely impact his life and also influence, in different ways, the lives of others. Readers will readily identify with the recurring themes of the work. A compelling read.’
Phillip Moore, Teacher Educator, Hong Kong Institute of Education 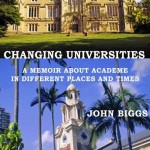