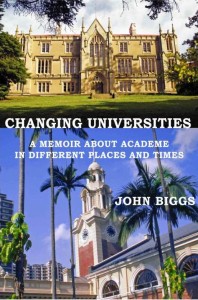 CHANGING UNIVERSITIES: A memoir about academe in different places and times

How have universities changed over the past 60 years? Are they functioning any better now than they once were? These are some of the issues that I face in reviewing my long academic career.

From student days I wanted to apply psychology to education. It was a long journey via universities in Australia, the UK, Canada and Hong Kong. My experiences were variously traumatic, bizarre, hilarious and rewarding, with the SOLO Taxonomy and constructive alignment as outcomes. My experiences tell what universities were once like, how they came to be what they are today, with a hopeful stab at what they might be like in future. I am critical of the modern corporate university but deny that, once upon a time, universities exemplified a Golden Age of scholarship …. Far from it.

“Biggs is a true scholar, happiest when left to his research and teaching. He had administration thrust upon him … but he thrust back.”                         John Kirby, Professor of Education and Psychology, Queen’s University, Canada

“There have been many books about the major changes to universities — usually decrying the managerialism,pursuit of funding and lack of collegiality.  John Biggs tells the story of change via a remarkable career – across four continents, seven universities, and different cultures. The intrigues, the power users and abusers, the games, and the spineless nature of too many within the universities seems not have changed for the last 50 years. More fun to read than the current attacks on universities, Changing Unversities still raises serious questions about how universities are run, for what reason, and for what benefits. This is a perfect read not only for current academics, especially for those moving to senior administrative positions,  but also for outsiders who wonder what happens in the ivory towers.”
John Hattie, Professor of Education and Director, Melbourne Education Research Institute, University of Melbourne

Available as e-book and hard copy on Lulu and on Kindle  or better still FREE PDF if you email jbiggs@bigpond.com