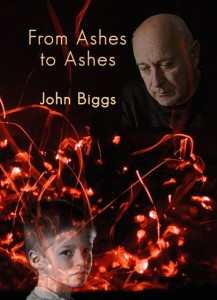 From Ashes to Ashes

‘The child is father of the man.’  William Wordsworth

Camus once said that the novel was “the lie through which we tell the truth.” From Ashes to ashes may be a string of lies about people who never existed but I was trying to address several truths. One truth that has become a cliché is Wordsworth’s “the child is father to the man”, another is Freud’s statement that “A fully functioning adult needs to get two aspects of life right: love and work.” The context I chose to illustrate these truths was school teaching. When Peter’s favourite teacher is pushed by his father to enlist in World War II, his boyhood is fractured by trauma and doubt. As Peter comes of age, he veers from the values of his conservative parents and begins a lifelong march to the beat of two different drummers. One drummer leads him to become a schoolteacher and dedicated family man like his father. The other draws him to illicit love, a midlife crisis and scandal in his own classroom.  With age and wisdom, Peter eventually rights his choices, retiring as a respected school principal. However, in old age and verging on dementia, he hears again the beat of the other drummer.

‘At last, a novel to rival the great Australian classics The Advancement of Spencer Button (1950) by Brian James and Sumner Locke Elliott’s Careful, He Might Hear You (1963)! The author’s philosophic fatalistic sense of humour, of defeat and death as part of life’s comic inevitability is striking. He invests his novel with convincing sociological recreation, rich characterisation, psychological insight and diversity of range – from comedy to pathos.  A hugely satisfying read and a fine family saga enriched ironically by the shadows of World War II.’       John Ramsland, Emeritus Professor, University of Newcastle, Author

… the development of the major characters and the handling of dialogue are major strengths. The symbolism gives depth to the narrative by exploring concepts of choice, duty, entrapment, and freedom. As a former teacher of literature, I was excited by the subtle layers of meaning in much of the narrative, thinking how the text would provoke discussion and analysis.   Ralph Spaulding, Former Principal, Cosgrove High School.

‘ … an enticing and engaging novel that reveals deep insights into pervasive factors influencing our lives. Peter, a school teacher, makes choices that severely impact his life and also influence, in different ways, the lives of others. Readers will readily identify with the recurring themes of the work. A compelling read.’     Phillip Moore, Teacher Educator (retired), Hong Kong Institute of Education