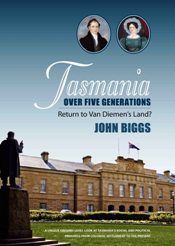 Here are stories about people, time and place. The people are father-son descendants of Abraham Biggs, my great-great-grandfather (pictured in the inset with wife Eliza, courtesy of TMAG), and the place is Tasmania . What do the stories of these five individuals tell us about the Tasmania in which each lived?

Abraham arrived in Tasmania in 1833. I tell his story and those of the next four generations of his progeny, against the social and political backdrop of the Tasmania each experienced. Just as the Boomers, Gen X and Gen Y are products of their times, so are my ancestors products of theirs. In telling their stories, I also describe the Tasmania in which each lived. I left Tasmania at the time of the notorious Orr Case, returning 40 years later in 2001 to find a tapestry of Byzantine complexity, woven with the warp of government and the woof of corporate power. Abraham might well look from that distant shore, nod, smile and murmur: plus ça change …

“… a narrative, placed in its social and economic context, which beguiles and entraps. Why have we not learnt from the past? Why repeat avarice, stupidity and abuse of position?” — Justice Pierre Slicer.

“… Biggs writes without fear or favour. The result is a lively and provocative work that “knocks the dust off” most conventional local histories. This reviewer enjoyed it immensely.” — Warren Brewer, Sunday Tasmanian

“It is rare to find a book that can offer a detailed, deeply involved history of place. Tasmania Over Five Generations achieves this. It is a blend of history, biography and political analysis; a panorama of time and an island. … an important contribution to Tasmania’s literature.” — Island Magazine .

“John Biggs has avoided the problems that beset so many family historians, partly because those he writes about are inherently interesting, but mostly because of his research ability, his skill with words, and a feeling for what will best illustrate the story of his family and its connection with the society of which it is part. I would be proud to have written a book of this quality and significance.” — Professor Ken Knight, author and historian

“It was with a huge sense of relief that I read the sections in John Biggs’ recently published book, Tasmania Over Five Generations , where he discusses in some depth of analysis Tasmania ‘s recent political turmoil about matters “forestry”, but especially the events surrounding the proposal to build a pulp mill in the Tamar Valley . … He doesn’t pull any punches. He extends this method to his ancestors and to himself and his own life. … For example, it tells the story of the Orr case of the 1950s in the most accessible and uncluttered way than has been written by anyone…. Biggs’ account of the first decade of Tasmania’s 21 st century is a valuable resource … the focus of his analysis has ensured that there is something out there in the public domain, in hard and ineradicable print, for the first time, which escapes the narrow confines of the mainstream media superficialities and deceptions. … Buy it, read it, keep it and use it. You won’t be disappointed.” –– Peter Henning, Tasmanian historian

“Pater Biggs” opens his bank and his son Reg catches HRH at it.

My father Oscar goes to University in 1921 and has very good reason to conclude that:

“A degree from the University of Tasmania isn’t worth a cracker!”

I return to Tasmania to explore the Tarkine but where is it?

Wilderness: What is it?